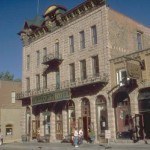 Recently I traveled with my wife to visit her friend and family.  The parents of this friend own a hotel, and I was very interested in seeing how a hotel is run.  I have hosted many live training events over the years, and although I’ve got some idea of how a hotel business is run, I was looking forward to getting a behind-the-scenes view.

This friend’s parents were an older couple, and they had owned the hotel for about 7 or 8 years.  When they first bought it, there was a large staff to manage everything, a busy on-site restaurant, a popular night club, and more.  Fast forward to today, and things have changed drastically.

When I arrived, I was surprised to find that although the hotel was located in a nice, historic area of town, it was rated only 2 stars. Apparently only hotels that are not operating are given a 1-star rating, so this was one step up from that. Not a good sign!

But that’s not all…. the night club was closed down, the on-site restaurant was closed, no room service was available, and this friend’s parents managed the entire hotel by themselves, with only 1 or 2 part-time staff to help out.  This historic hotel had gone from booming to barely surviving in the span of only a few years.  In fact, this friend’s parents hadn’t had a break from their hotel business in YEARS.

After getting to know this older couple, we finally had a chance for the grand tour.  Here’s a quick overview of what we got to see…

Overall, I really enjoyed the tour.  It was great to see old architecture and get a behind-the-scenes look at how a hotel business was run.

After the tour, we began talking about the financial aspect of running the hotel.  I asked the older man why he didn’t run the night club, offer room service, and rent out the conference rooms.

Apparently he did occasionally rent the conference rooms out for big events (like company parties and weddings), but he’d been taken advantage of too many times by unscrupulous ‘partners’ for other aspects of the business.

These were essentially ‘joint ventures’, where two individuals or companies would joint forces to accomplish more than they could on their own.  Unfortunately, they were not structured properly and the partners were a poor choice, which led to fraud on multiple occasions.

There were other stories, but I’ll spare you the details.  To make a long story short, he had been burned badly in quite a few of these types of joint ventures, and he didn’t want to try them again.  Yet he and his wife couldn’t keep doing all the work themselves.

The end result was that business at the hotel kept slowing over time, and he was forced to begin scaling back, laying off staff, and closing down amenities until he was at the point where it’s at today.

How I Would Turn Things Around

I’m the first person to tell people that I am NOT an expert at hotel management.  However, I felt really bad about the situation and I wanted to help.

Here are some of the things I suggested to them, things that I would do if I was owned this hotel and wanted to turn it around…

Most of these ideas require no money out of my pocket, are relatively risk-free, and only take a little bit of my time.  It might take some time to find good joint venture partners to work with, but once I do, the extra profit would be pretty much guaranteed. I could then reinvest the cash into hotel upgrades, hiring staff, re-opening amenities, and more.

A Different Kind of Joint Venture

The types of ‘joint ventures’ that I’m talking about are very different from what most real estate investors are accustomed to hearing. When a real estate investor hears the words “Joint Venture”, they immediately think of using other people’s cash and credit to buy property.  And that can be an excellent way to buy more property than you could otherwise buy on your own (I’ve used it many many times myself).

However, as you can see from the examples above, joint ventures are not specific to the real estate world.  There are many ways other peoples time, money, and resources (such as credit) can be used to create more profit than you could do on your own.

And it’s all because I learned the power of leveraging other people’s time, money and resources (not just credit).

So remember this story and think outside the box the next time you discover one of your rental properties has negative cash flow.  Ask yourself…

If you open your mind, you may find the answers you receive could mean the difference between making a profit with your property or losing money.